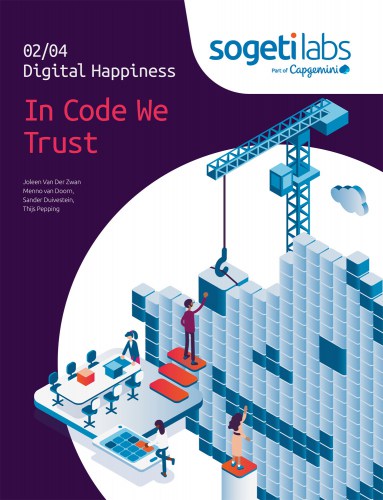 Digital Happiness 2 In Code We Trust

It has been said that data is the new oil and that data organizations are the new oil barons. It is telling that we call the companies that trade data “barons”. The word “baron” expresses the balance of power between those companies and the individual user. The five largest organizations – Apple, Alphabet, Amazon, Facebook and Microsoft – are even called “The Frightful Five”. With half of the world’s population online, the spiritual father of the WorldWideWeb, Tim Berners-Lee, now wonders whether it is wise to connect the second half of the population. What is going on here?

Tensions about the further course of the digital revolution are rising sharply. The current reason for this is the manipulative practices of Cambridge Analytica. The company is accused of data theft and unlawful interference in democracy through psychographic influence on voters. That they were able to do this is partly thanks to Facebook, which saw it all happen right in front of them. “It is a trust issue”, says Mark Zuckerberg. But there are many more trust issues. The old institutions and brands are also experiencing a trust crisis. For years on end, trust in organizations and governmental bodies has been dropping. There is, however, a glimmer of hope on the horizon: blockchain is now used to organize trust differently.