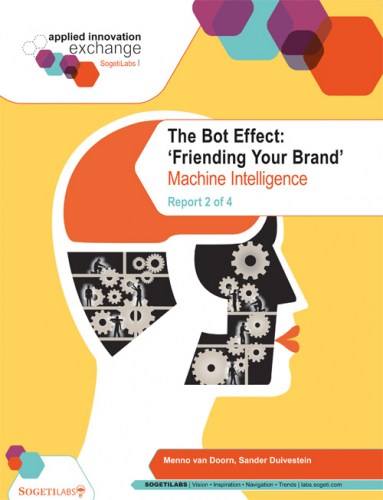 During the F8 developers’ congress on 12 April 2016, Mark Zuckerberg, CEO of Facebook, disclosed that he was routinely using ‘bots’ – smart software applications – on Facebook Messenger. According to Zuckerberg Messenger is now sizeable enough to embed it in a new ecosystem. Apart from friends and family, we can now also use this platform to have conversations with artificial ‘friends’. These so-called friends are services that are being offered by businesses in particular.

Many people may still find it difficult to conceptualize ‘brand as a friend’, but the underlying idea is perfectly clear: Facebook aims to reap the fruits of the popularity of messaging by allowing bots to be implemented on the platform. The fact is that on a monthly basis more than 900 million people are active on the Messenger platform, while on a global scale almost 3 billion people are chatting every day – not just via Facebook Messenger, but also via other chat applications, such as WhatsApp, Line, WeChat and Kik.