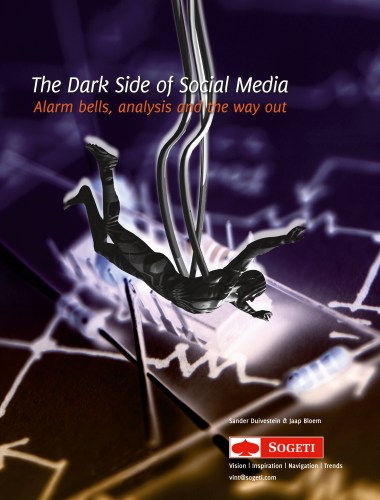 VINT Report The Dark Side of Social Media Alarm bells, analysis and the way out

When we were working on the VINT books Me the Media (2008) and The App Effect (2012), it became increasingly evident that the darker sides of the social media more than deserved their own elucidation. It was not to amuse ourselves but rather to examine the developments and the accompanying concerns, and to deliberate on a way out. Accordingly, you will find a three-stage rocket in this work.

We begin with a chronicle of all kinds of alarm bells that have gone off in the course of time and seem to be ringing even louder now. Then the reader is presented with an analysis section that starts with the jet-black consequences for the 21st-century Homo Digitalis Mobilis. In conclusion, we offer our way out.

We have explicitly avoided political pitfalls such as the recent riots in the UK, the Arabian Spring or Project X in Haren, the Netherlands. Instead, we grab our ten jetblack consequences by the horns.

These go much further than rebellion and disturbance,even further than a Facebook murder or suicide — if we may be so callous — because they penetrate right into our individual and social being. The frenzied and painful barb must be excised from the social media. That can only be done through our behavior and with our technology.

This combination has put us in a difficult position, but on the basis of the right vision it can also serve as a lever to give our lives beyond and with the social media – and thus not without them — more value and humanity.

Alarm bells and analysis, of course — and also a way out!